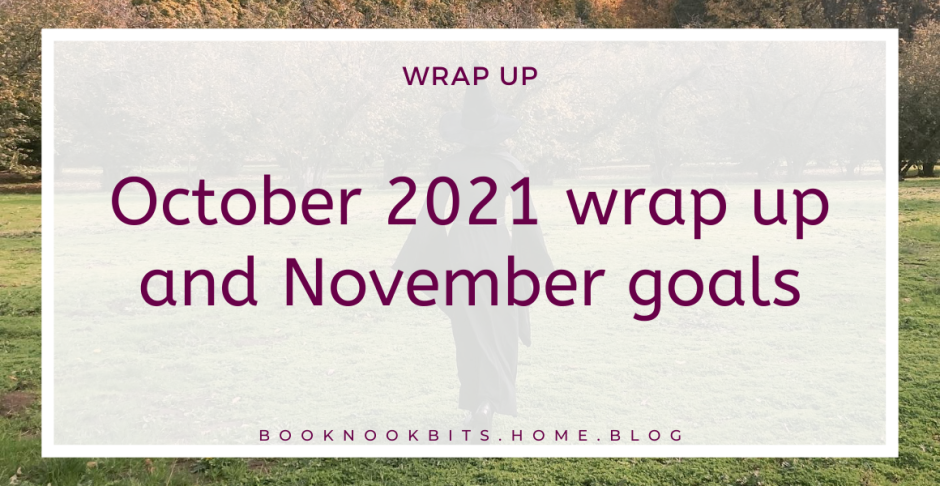 Hello, and happy November! I’m so excited that it’s November, and there are a ton of things that I’m really excited for happening this month, Nanowrimo especially! I honestly have no idea what to put here, so since apparently all my creativity is being channeled into my book, I’m going to skip an intro and go straight into this wrap up post!

In October, I read eight books

In October I wrote…

Overall, I wrote 18 posts in October, which I can’t really believe!! It’s the most I’ve written in a month in a very long time, and I honestly had so much fun blogging this month.

I wasn’t as active with bloghopping as I’d hoped to be, but I did discover some new blogs, and read a ton of amazing posts from other bloggers!!

Because I’m going to be so busy with Nano in November, I’m not going to set a TBR for the month, because I really don’t think I need that added stress.

I do have a handful of books that I would love to read if I have time, and here are a few of them: I’ve already read a chunk of Bloody Spade, and a fair amount of Aria’s Traveling Bookshop so hopefully finishing those two at least shouldn’t be too difficult.

I have a plan for the posts I want to publish in November, and although it’s not as much as October it’s still a fair amount, so I’m going to do my best with that!

With nanowrimo though, I know that I’ll have less time for blogging, so the blog posts I do post will probably be on the shorter side, but I’ll have to see how it turns out!

I really want to do a mid-month writing update, to sort of check in with where I am with nano, and aside from that I have one or two reviews I’m planning on posting.

I’m going to stick with weekly reading wrap up posts since those don’t take as much time as other posts do, so you can expect to see those, as well as probably a few discussions! Other than that, I’m going to be spending most of my time writing for nano!!

I did a little writing in October, but mostly focused on nano prep, focusing on preparing for the novel I’m trying to write in November for nanowrimo (national novel writing month.)

In November, my overall goal is to participate in nanowrimo, and write 50 thousand words of the first draft of my book! I made an entire post with my plans for that, which you can read here: My plans for nanowrimo 2021.

I also have a ton of prep to do for nanowrimo, which is in just one month!! It is so soon, and really feels like it’s come up so quickly. I know what I’m going to write for it, and you can expect to see some posts surrounding it coming soon!

My birthday was October 17th, and I turned fifteen, which is really exciting for me! This is the third birthday I’ve celebrated with this blog, and I can’t believe how much I’ve changed in that time.

I also got my learners permit, and am learning how to drive!! It’s absolutely terrifying, but really fun, and I’m loving learning to drive.

I’m reading a book in literature class, which isn’t my favorite, but we’re way overanalyzing it, and I can’t stand reading it anymore. We’re focusing so much on all of the metaphors and similes and analogies that it completely takes away from the enjoyment of the story.

Other than that, I don’t think too much has happened to me in October. Dance has been a lot, but fun, and of course, blogging has continued to be really fun for me. So I guess this is it for the life section!

How was your October? What are some of your goals for November ? Did you read any good books this month? Chat with me in the comments below!

3 thoughts on “October 2021 wrap up and November goals”

Hi there, and welcome to my blog! I’m Aria (she/they), a nonbinary Jewish teen book blogger and reviewer. On my blog, I post about all sorts of books, and all sorts of bookish things. I love fantasy worlds I can escape to, contemporaries I can cry over, and any sort of historical fiction. Someday, I want to be a published author and a journalist, and right now I’m working on writing a few books of my own. You can read more about me here.

Hello, and Happy October!!
Hello, and happy last day of August!
Did you read any good books for pride month?
Hello, and happy almost July! It’s been a very long time since I last posted here, almost three months, but I’m happy to be back.