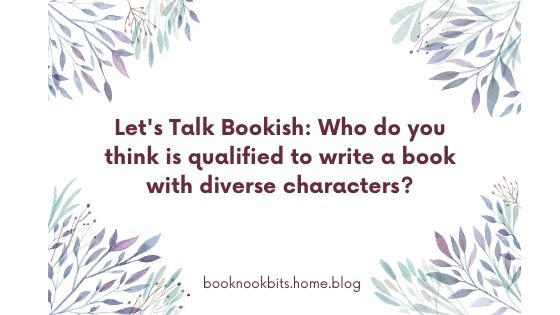 Hello! I hope you all have had a marvelous week! I finally finished the Book Thief, after taking almost the entire month to read it, but here I have this week’s Let’s Talk Bookish. Let’s Talk Bookish is a weekly discussion post hosted by Rukky @Eternity Books, and this week’s question is: Who is qualified to write a book with diverse characters?

I feel like this question isn’t really about the people writing, but their willingness to research and take the time to make sure that everything in their books is correct and respectful to everybody. I would never say that some people just all together can’t write books with diverse characters, but that authors should be careful with how they represent those characters.

I’m part of a minority group where I live, (I’m Jewish) and its really disappointing to see when, especially in YA books, a Jewish character is represented in incorrect and misleading ways.

In most books I’ve read that have Jewish characters, the Jewish character is the main character, and being Jewish is their entire life. I’ve only read a few books where there is a secondary character who is Jewish, or another minority religion or race or ethnicity where they live where that is only one aspect of their character, not the only thing that defines them.

One example of that is the book It Ain’t So Awful, Falafel, by Firoozeh Dumas. In this book, Firoozeh Dumas does an incredible job with incorporating diverse characters in a fantastic way. Of course, one of the main parts of the book is that Zomorod is Iranian, but there is more to her than just that, and Firoozeh Dumas shows that in her writing.

Zomorod, the main character is Muslim, but her family is not super religious, and kindness is what’s valued.

“My dad always says that kindness is our religion and if we treat everybody the way we would like to be treated, the world would be a better place.”

Firoozeh Dumas includes characters of many different religions into her book, but in subtle enough ways that it’s not the main idea of the book, it just makes the story better! Zomorod is Muslim, Rachel is Jewish, and Carolyn is Christian, and they are all very good friends. As Zomorod puts it;

“… even though we belong to three different religions. We are alike in so many more ways than we are different.”

Firoozeh Dumas recognizes that religion isn’t everything, and that there is so much more to a person. I really appreciate that in a story.

This post got very off topic, but one, it gave an example of how of an amazing book with diverse characters can look like, not just what it shouldn’t look like, and two, now I have a huge chunk of writing that I can copy into my soon to be finished review of It Ain’t So Awful, Falafel. (so that’s of course an added plus…)

If an author’s going to write a book with a bunch of diverse characters, it’s impossible for them to have personal experience with every aspect with every single one. Also, it’s really important for books to have diverse characters. The most important thing, in my opinion, is that authors really need to make sure that they are being respectful of everyones religions and cultures and everything. If they don’t have personal experience then they should do their own research and make sure that their representations of all the aspects of their characters is correct, appropriate and respectful. That is a great way to write about diverse characters!

What’s your opinion? Who do you think is qualified to write a book with diverse characters? Do you agree that a characters ‘different’ religion, culture or heritage will sometimes be the only thing shown about them? I’d love to hear your opinion, so chat with me in the comments below!

One thought on “Let’s Talk Bookish: Who do you think is qualified to write a book with diverse characters?”

Hi there, and welcome to my blog! My name is Aria and I am a teenage book blogger! Here on my blog, I post all sorts of topics: book reviews, lists, discussions and more! You can read more about me here.